In loving memory of Alpha Of Xilver Highland 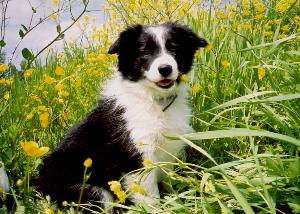 Alpha straight away caught our eye… From the very first visit at Ilse’s place he stole our hearts. I will always remember my keyhanger having a small sheep on it, he would grab it and run through the garden with it, followed by all his brothers and sisters, who were trying to get in on the fun.

When we could finally take him home, I really bonded with Alpha. He spent the long drive  home on my lap, just constantly looking at the pair of us.

He was a brilliant pup, and spent the first 6 months of his life behind the reception desk of our hotel, where he was loved and adored by all collegues and customers.

Alpha became more than our pet, he was part of the family. Our day of was always planned around Alpha. He was extremly funny, caring and always so very adjusting to any situation.

We could take him absolutely everywhere, he would be mad as a nutter on the beach, but just enjoy the scenery when we sat down for a coffee afterwards.

Having such a wonderful dog made other people also enjoying his company. Two friends of ours very much enjoyed taking Alpha on their pleasure walks in the weekends.

A lot of dog owners take part in these organised walks, and it was just a delight to see the enjoyment of our friends when they came home from a walk. They were so proud of him…. 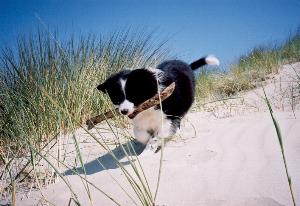 That Sunday I was too busy to take Alpha out, so I counted on our friends again to take him on his daily walk. Jacques and Alpha did the walk they had done so many times before.

The ‘Tweebergenpad” in Westouter – Heuvelland is a very nice 7 km walk with quite a few hilly climbs. It was a beautifull day and he must have enjoyed it so much, because he was covered in mud. Alpha always loved water. Any pond or lake he would jump in it.

When he’d come across a puddle, he would for sure go and lie in it. 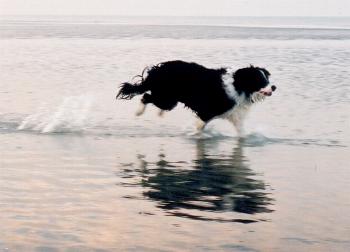 It was towards the end of the walk… Alpha was back on the lead already and he was sniffing away along the side of the road. He always eats everything he passes. It’s not surprising that Jacques didn’t even notice the piece of fish he must have quickly swallowed while he past it.

It was another 10 minute walk to the car, and Alpha was happily jumping up trying to catch the lead, as he always did.

As they got to the car Jacques took his drink out the boot, prepared it for Alpha.

He was very sick and couldn’t get up anymore. Jacques responded immediately, picked Alpha up and rushed home. We went to the vet straight away, but it was too late…

The amount of poison Alpha eat, was too much to make any chance…

Even if the vet would have been with him, there was nothing we could do.

He died within a few minutes.

We went back that night. It was very important to find the poison to be able to analyse what it was. It was Temik, which is used in farming as an insecticide. Highly deadly in uncontrolled amounts. The amount that was put in the pieces of smoked fish we indeed found, was enough to kill 5 human beings.

We started knocking on people’s doors, asking them if they knew anything more…

We were shocked. The very same day another labrador was killed in the same street.

We found the lady the same evening only to learn that Frodo, her black 9 month old labrador died the same way… Only she fought 1 hour for her life. The vet said she had a very strong heart.

We went to the police to report the case, but they were not really interested. We really had to persuade them to make a report. They didn’t want to analyze the poison, as that is something the state does not want to pay for. So we decided to have it analyzed ourselves.

The next day we said goodbye to Alpha. I promised him that I wouldn’t give up untill I found the person that did this to him. 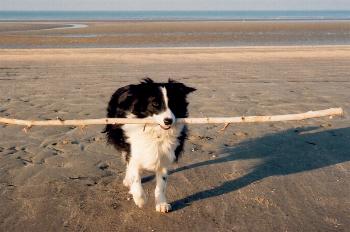 So we did… We made up a flyer which was spread over the whole area where he was killed.

We spread it to 6635 adresses. It was put in newspapers, it was reported on the local t.v. and radio. The reactions were massive.

On the telephone number as well as the post box we opened.

Same period, March – April. The locals were telling us that the hunters attempt to poison foxes, so that they have enough game for the next hunting season.

A few names were mentioned as well, 1 name kept coming back…

I cannot descripe the anger inside me. How can this problem have been going on for so many years without anybody even attempting to stop it ????

How can anybody put extremely lethal poison along the side of a public foot path and sleep at night ?????

The Wednesday after Alpha died, my phone went at about 21.00. It was Sanne.

She was in a panic. That night she took both her Golden Retrievers to the same walking path in Westouter. Kyra, a 3 year old bitch must have also eaten poison.

She started shaking, fell down and was sick. Sanne didn’t know what happened and she (luckily) immediately phoned her friend in the village. Having seen the flyer, the friend immediately knew what it was, jumped in the car, picked her friend and both dogs and drove to the vet. They warned him over the phone, that it was likely to be a Temik poisoning and the vet kept the anti-poison ready. It looked like Kyra was saved.

Sanne spent the night with her, to make sure she wouldn’t get a new attack, but she’s alright now. When she phoned me the next day to thank me for saving her dog, it did something to me. It will never bring my Alpha back, but it felt so good to have saved Kyra.

I went back to the spot the same day. I wanted to find the sick of Kyra. I did, and was shocked to see that it was exactly the same, the posion was inside a piece of smoked fish.

The fish was fresh. I couldn’t believe that this guy was still doing the same thing despite the articles in the newspapers, tv and radio !

He must be a very sick person in the head.

It’s 3 weeks now since Alpha died and the pain did not get any better.

It never will, untill the person has been convicted. I have a very important meeting tomorrow with the local game keeper (boswachter) and environmental organisations. (Natuurfonds Westland). They all have been trying to stop this man, but never found a victim who was prepared to fight him and to take this to court.

We will. Together with the help of Gaia and a lawyer they recommend we will try and fight this. It’s too late for tens and tens of dogs, but I want to know that it is save for me and other people to walk my new dogs.

And I promised Alpha…

I hope it will help me to be able to accept his death.

If anybody could help us in the investigation of illegal poisoning,